Census 2010:  Cities by People not Politics

What are the biggest cities in the US?  The usual lists are based on artificial boundaries that reflect politics more than population.  Fortunately the US Census Bureau publishes a table that let me do my own analysis.  The country is divided into about 74,000 census tracts with about 5,000 people each, and http://www.census.gov/geo/www/2010census/centerpop2010/tract/CenPop2010_Mean_TR.txt has the actual population of each tract with the latitude and longitude of its center.  So ignoring legal boundaries, how big is a city?  I used the simple idea of distance from a point -- how many people live within some distance, like 20 miles -- to define the population of a city centered at that point, and then I used the census table to do this calculation for every point on a map of the lower 48 states: 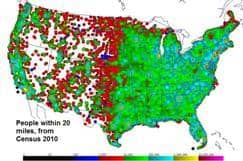 This map is color-coded with a logarithmic scale, since the population varies by orders of magnitude, from more than 10,000,000 within 20 miles of a point in New York City to the isolated census tracts in the west with sometimes less than 1,000 people spread over much more than 20 miles, so there is a lot of white space out west and one can see the assumed size of a census tract as a circle with a 20 mile radius.  The dramatic difference in population density between east and west stands out, the interior west being high and dry and sparsely populated.

With this map, the biggest city is the point with the largest population.  Once I found this point, I removed all the census tracts that contributed to it (i.e. within 20 miles), recomputed the map, and again found the maximum point to locate the second largest city.  Doing this repeatedly gave this list: 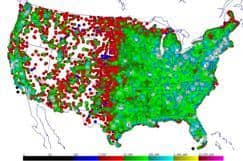 And 20 miles is an arbitrary size, but the same method can be used with any radius, although the results differ.  I have tried sizes from 5 miles to 50 miles, and the big 3 always stand out:  New York City, Los Angeles, and Chicago.  But the ranking of the next tier of cities varies.  The Census Bureau did a similar analysis for 1990, ranking "urbanized areas" as well as cities, http://www.census.gov/population/www/documentation/twps0027/twps0027.html#tabB, although its urbanized areas also have varying boundaries.  More recent lists like http://en.wikipedia.org/wiki/List_of_United_States_cities_by_population and the sites it references show a similar pattern.  I live in Houston, TX, where people are proud to point out that it is the 4th largest city on the census list, although Houston is listed as the 9th largest urbanized area in 1990 and this lower ranking gets less attention -- in fact, I'd never heard it before starting my own analysis.  My method ranks Houston #6 in 2010 with a 20 mile radius; does it rank higher with a different city radius?  No, it never gets higher than #6, and perhaps the 20 miles radius I chose feels right to me because of my experience of living in Houston, where commutes of 10 or 20 miles are common and set my expectation of what defines the size of a large city.  But the method is general and its value doesn't depend on a particular circle size -- its virtue is that it ranks cities simply by geography, ignoring artificial boundaries, to make an interesting map and yielding lists based on people, not politics.